Team Coach - We are delighted to have the help of Denis Cronin, Macroom, Cork, who guided the 2009 team to a Gold Medal!  He will be assisted by John Buckley.  We are very grateful to have the help of these two great anglers. Also Allen Griffin of Allens Baits who is our flytyer. 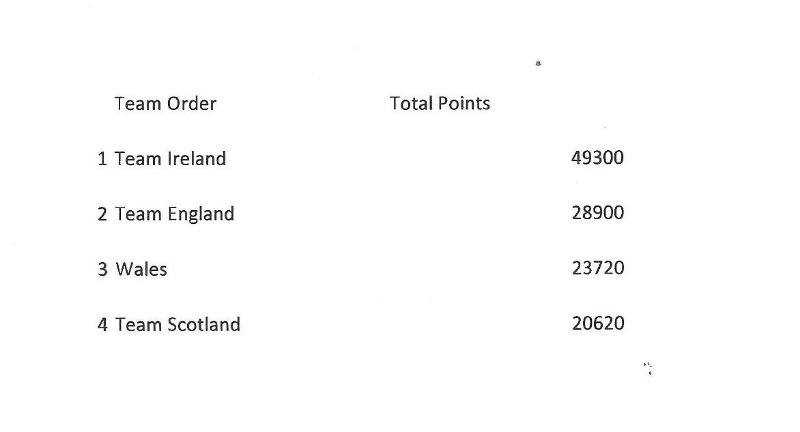 The competition was run as a “Catch and Release” event. Competitors used barbless hooks allowing all fish to be returned ensuring the level of stocks of beautiful brown trout in the lake remain unchanged.  Tuesday and Wednesday, the two practice days, weather was mixed and spells of soft rain and warm sunshine, and a southerly wind with an air temperature of 11*c.

On Thursday, the competition day,  the weather started with one heavy shower and for the rest of the day there were a lot of cloud cover and a change in the wind to a westerly direction, the air temperature was 17*c. The four countries were escorted up the river behind the safety boat, and released into the lake with boats scattering in all directions to take up their positions.

Denis Cronin, the Irish Coach, who has a specialised interest in Brown Trout, brought out his firm and fair approach to the thirteen Irish ladies, guiding them to their second Gold Medal. Denis was ably assisted by John Buckley who was equally determined to make this International in Kerry a memorable event for every one competing, his energy and enthusiasm was absorbed by everyone. Allen Griffin, who is a Sea fishing Champion, was the Irish Ladies fly tier and his small and tightly finished flies were admired by all the boat men and the ladies.  The many local boat men who attended the three days welcomed the ladies with a warm air of calm and professionalism that any country would be proud of. Michael O’Shea the Fishery Manager, proved more than up for the job os handeling fifty two women going fishing – his organisation was faultless. The Ennis Camera Club photographers, blended into the crowd in a very friendly and professional manner and caught the atmosphere of even the most camera shy competitors with ease and efficiency. The Olde Glynbeigh Hotel, with its rugged Irish charm, catered for the Irish team with admirable Hospitality. The Kerry Ocean Lodge and the Towers Hotel in Glenbeigh catered for the other three countries with a warm welcome and its usual Irish charm that everyone enjoyed. The local Centra shop opened very early to allow the ladies to get a packed lunch for a very reasonable price.

A very special Thank You, must be given to the sponsors of our Raffle. Items varied from  fishing equipment, kitchenware, hamper’s, fishing instruction, and angling and hotel breaks  totalled a sizable sixty prizes.

The next ILFA event will be held on, 1st September on Lough Lene, near Castlepollard.

Any ladies interested in joining the Irish Ladies Flyfishing Association or competing for the Irish Team competing in Wales in 2014 please isit www.irishladiesflyfishing.com or ring the Irish Captain Julie Gerry on 0872055094.